For the past few years, I’ve been a big fan of the LG Gram 17. It’s got great battery life, a massive screen, and it feels like it weighs basically nothing. But if there’s one hesitation I sometimes have about the line, it’s the aesthetic. The Grams of the past have just looked a bit… boring. Which is fine — many laptops are — but also means there’s a fashion-conscious audience out there they potentially aren’t reaching.

Enter the LG Gram Style. This, as the name implies, might be the first LG laptop I’ve ever seen that I’d really consider calling “stylish.” It’s unbelievably thin, it’s mind-blowingly light, and it’s covered in a lustrous color-changing finish. My hands-on time with this device was in LG’s very dimly lit booth at CES 2023, but it was certainly one of the most unique-looking laptops I’ve had the opportunity to try so far this year.

That does not mean that this is a laptop that will work for everyone. But it’s certainly one that might turn heads at the coffee shop. And it’s a bold new look for an established line, which is always fun to watch unfold.

This looks silvery-white-ish when not under this colored light.

The first thing to talk about is that finish. It’s iridescent, changing color depending on lighting and viewing angle. In LG’s words, the laptops “shine and shift dynamically; moving and changing depending on the light and angle.”

Up close, this looks like a silvery white. But I can confirm that as I moved the device around, it flashed and signed in different hues, looking blueish and even orange at times. I wish I’d been able to better capture that on camera — again, a challenge with the lighting.

I had to try several times to get this shot before the lights disappeared.

That luster extends to the bottom part of the Style’s keyboard deck, which is one smooth surface — there is no touchpad visible. There is a touchpad under there, in the location where you’d expect a touchpad to be, but it’s haptic and hidden.

We’re seeing more and more of these types of trackpads on laptops this year, and they generally help companies get them thinner (which remains a major draw of the Gram line). Dell’s XPS 13 Plus also had a hidden touchpad last year, and I had mixed results with it. In general, my right hand (I’m right-handed) knew where to click from experience without needing the touchpad delineated, but my less experienced left hand had misclicks here and there when it needed to sub in.

What the Gram Style does have (that the XPS 13 Plus didn’t) is LEDs around the touchpad that illuminate after you touch the area. They stay on for what can’t be more than a few seconds after you click, and then they disappear. So, I mean, that’s better than nothing, but still doesn’t help you find the thing when you need to click it. The lights do look pretty, though. I’m not sure why there couldn’t be an option to leave them on.

A third very pretty thing: the screen. Each Style model (there’s 14-inch and a 16-inch options) has a 16:10 OLED display, and despite the odd lighting, they looked great in LG’s demo area. The keyboard was also fun, with quite a nice click. I like Gram keyboards in general, but there’s always a worry that a super thin laptop might not have room for great switches.

Oh, and this thing is so light. It’s one of those devices that messes with your mind when you pick it up. At 2.2 pounds (999 grams), you could fool me into thinking that this was an empty chassis. That’s nothing new for LG laptops but is a nice assurance that the Style, despite its various oddities, remains very much a part of the Gram line.

One other hot tip: There are even wilder designs coming. LG had a bunch of patterned Gram Style lids on display — purples, pinks, polka dots galore — and was taking a poll at their booth where attendees could vote for their favorite one. Representatives claim that the company will bring the winner to market. I voted for the purple one, so I hope that one wins. Stay tuned.

Photography by Monica Chin / The Verge 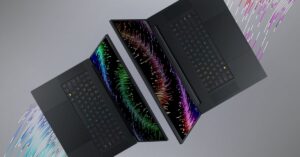 Previous post Friday’s Top Tech News: Let’s Give It Up For The Laptops Of CES